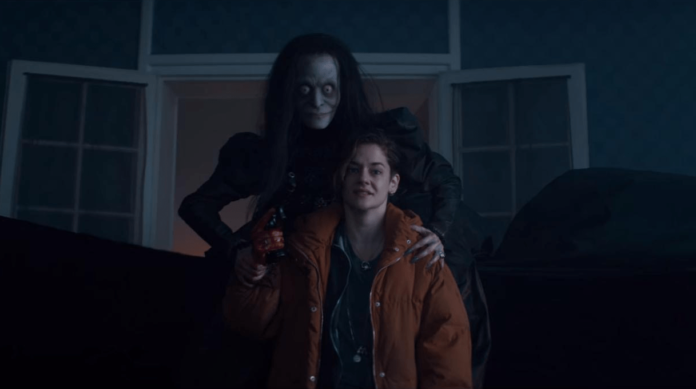 Another foreign-language horror series on Netflix, many fans are desperately waiting to see Marianne season 2.

Another foreign-language horror series on Netflix, many fans are desperately waiting to see Marianne season 2.

This French horror TV series premiered on Netflix on September 13, 2019. The first season, directed by Samuel Bodin and written by Bodin and Quoc Dang Tran, consists of eight episodes, with a duration of approximately 36 to 52 minutes per episode.

Marianne follows the story of a young novelist named Emma Larsimon, who achieved her success and fame by writing a novel about her own nightmare. In her nightmare, an evil witch named Marianne continues to haunt her in her sleep. She didn’t know that the characters she writes in her horror books are real, and they don’t want Emma to stop writing about them.

Due to the perfect definition of scary and suspense, a clever storyline, and terrifying supernatural creatures, Marianne is quite popular among the horror freaks, even outside of French-speaking countries.

Unsurprisingly, the TV series has received positive responses from both audiences and critics. IMDB gives this TV show 7.4 out of 10 ratings, while Rotten tomatoes give this series a 94% critical rating and an 88% audience rating.

So, with this kind of excellent feedback and a cliffhanger from the first season, a lot of people are sure that Marianne season 2 is coming. But is it?

Will there ever be Marianne season 2?

Unfortunately, despite the remarkable reviews for this Horror series, Netflix (Daybreak) has decided not to continue with this show, which is why there will be no Marianne season 2. After the first season, at the end of January 2020, Netflix has officially announced that it has been canceled.

Since the first season ends on a huge cliffhanger, we can’t blame the audience for expecting Marianne season 2 to be here. So when this cancellation news was reported, it caused huge heartache for the fans.

Well, although this series got so much love in the early years after the release of the first season because of how scary this show was, this TV series is not as popular as the creators thought it would be. Despite getting good reviews and ratings, its viewership is not that great. It is very important because the number of viewers is more important than the ratings in terms of giving Netflix profits.

With a huge cliffhanger, the first season left us with so many questions unanswered. So Emma wakes Marianne from the grave who encourages Emma to go to the seaside with her. But in the end, Emma is able to refuse her offer and burn Marianne’s body, leaving her to rest.

While on her way to leave Elden, Emma discovers that she has slept with Marianne’s demonic husband, Beleth, instead of Séby. And if she takes a pregnancy test, it comes back positive, so she could be pregnant with a demonic creature inside her.

So in Marianne Season 2, we got to see Emma interacting with her half-demon baby in her body, and maybe her nightmare isn’t really over yet.

If they decide to continue with Marianne Season 2, we can expect the same main cast to return. It would be Victoire Du Bois as Emma Larsimon, Lucie Boujenah as Camille, Bellamine Abdelmalek as Arnaud, Tiphaine Daviot as Aurore and Ralph Amoussou as Séby.

There would also be Mehdi Meskar as Tonio, Délia Espinat-Thief as Marianne, Alban Lenoir as Inspector Ronan, Mireille Herbstmeyer as Mrs. Daugeron, and many others.

There is also the opportunity for new characters as the story develops. That said, it’s such a shame we might not get to see these characters in Marianne Season 2 (at least for now).

Marianne Season 2 trailer: is there a teaser yet?

At this moment, this video trailer is very precisely to the new season of horror drama. The official video trailer will be released near the release date.